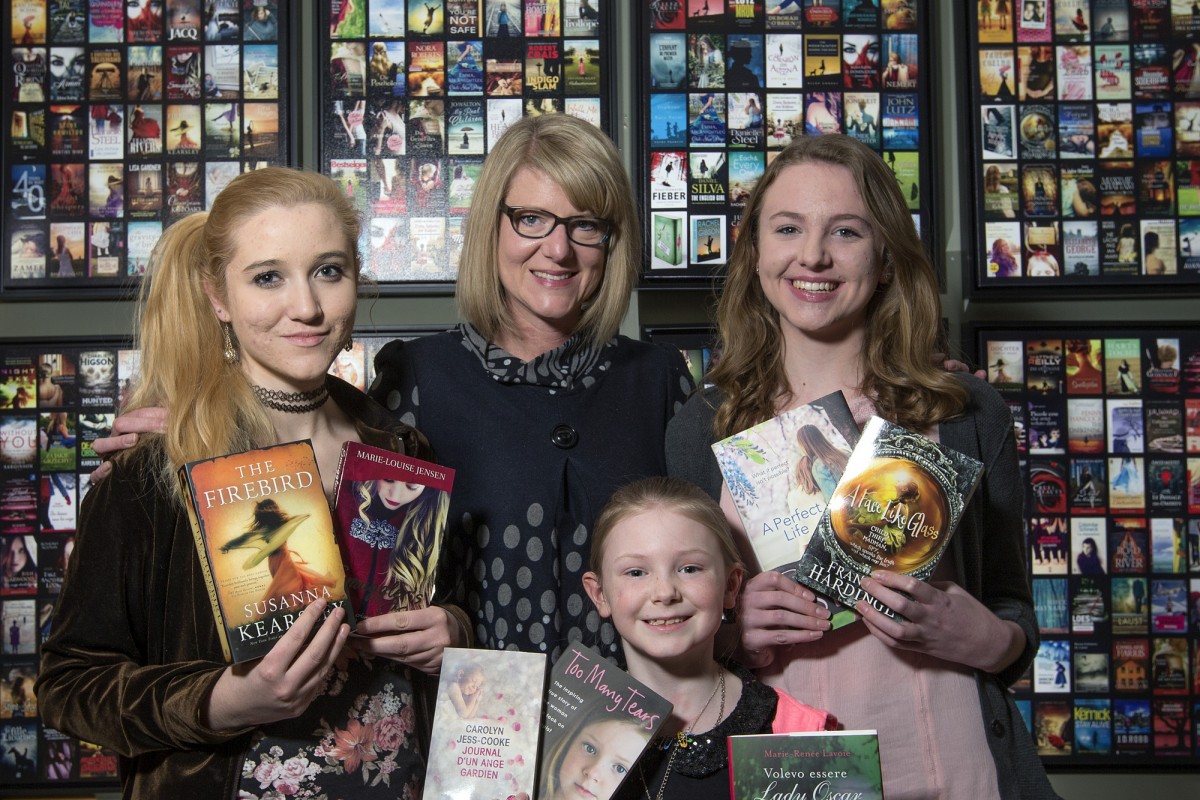 Plymouth photographer has it covered when it comes to hit paperbacks. Who knew you could make a career as a paperback photographer? Enterprising Elisabeth Ansley of Plymouth is doing just that, from Stephen King to Nora Roberts.

Who knew you could make a career as a paperback photographer? Enterprising Elisabeth Ansley of Plymouth is doing just that, from Stephen King to Nora Roberts.

When Elisabeth Ansley says she’s between covers, she doesn’t mean her sheets and duvet.

Ansley shoots cover photographs for mass-market paperback books, often from her home in a newish Plymouth housing development, using her three daughters as models. She has shot nearly 500 covers, published in 25 countries, in less than five years. Her latest work, for the thriller “Private Vegas,” co-authored by top-selling James Patterson, came out Jan. 26.

Ansley, 44, has created cover shots for other big names, including Stephen King, Nora Roberts, Mary Higgins Clark, Danielle Steel, David Baldacci and Anna Quindlen. Most have been for European editions. But the new Patterson — a guy so important to major player Hachette Book Group that they have a whole department, including three art directors, devoted just to him — is for the substantially larger American readership, and her biggest score to date.

“He’s the Holy Grail,” said Ansley, a soft-spoken, laid-back presence who can whip up a nuanced cover-shot mood by artfully draping curtains over the lights in her upstairs bathroom. Her basement laundry room contains a wardrobe of elaborately embellished satin gowns culled from vintage-store bins.

Ansley’s success story reads like something from one of the adventure romance novels that make up one category of her business. A self-taught shooter, she wandered into her career after discovering a passion for landscape photography in Australia, where her husband, Christopher, an international tax consultant, was temporarily working.

That led to an online portrait business, and her first book cover, for a self-published Australian author. Criticism of her portrait work actually led to her surprising profession.

“I was often accused of doing photos that looked unnatural, more like dramatic storytelling — like book covers — than realistic portraits,” she said. “I really like telling stories, so the penny dropped and I realized I should be doing just that.”

She began researching agents who sold work to publishers, found one in England who looked prosperous and prestigious, and gave him a call. “He must have been feeling charitable that day, because he took me on before I even knew he was the guy,” she said.

“The guy” is Michael Mascaro, owner of Arcangel Images, a leading supplier to the publishing industry. “It can take photographers a long time to get to the point where they just ‘see’ covers when they are shooting images,” said Mascaro. “Liz has developed this ability — it’s become second nature.”

Like many talents that might seem easy to master, Ansley’s is based on a lot of practice, research and developing an eye.

“To be able to get to this stage, she has studied international trends and other photographers’ images,” Mascaro said. “She is also constantly improving her own technique and style.”

Ansley grew up in Arizona. The family moved to Minnesota in 2003, but has lived around the world because of Christopher’s job — which helps with her ability to shoot salable images for different markets.

One of her best resources is the Internet, which has brought together a worldwide niche community of unsung cover creators like her. Through social media and fan pages (Ansley’s is on Facebook), they trade ideas and support. “We’re in competition with each other, but we’re also the only ones who understand what each other is doing,” she said.

Ansley figures she clears about $200 a cover, though the Patterson job paid quite a bit more. “I’m one of the few who makes a living at it,” she said. “I make about as much as a teacher.”

Ansley’s most frequent models are daughters Chaeli, 20, Georgia, 17, and Niamh, 8, with other friends and family members filling in when older folks are needed. Most do it in exchange for some photos and the knowledge that they’ve modeled for a book cover.

So what skills does this particular type of modeling require?

“There’s a lot of twirling,” said Georgia. “And running away while looking over your shoulder.” Sounds simple, except when an antebellum look is required, and Mom wrestles one of the girls into a hoop skirt with bustle — in a public park.

The girls are good-natured if a bit blasé about helping their mother. It’s become an expected chore, like dusting or drying the dishes, only more fun. But Dad remains steadfast in his abstinence from posing as a pirate or private eye. Ansley pays professional models now and then, especially when a certain historical period must be invoked.

“I have to try to look sad a lot,” said Niamh, a chatty, high-energy pre-tween. “I got so used to it that once when some people were smiling for a family picture I told them, ‘No, don’t smile,’ like Mom tells me.”

If Ansley gets on the Patterson bandwagon, it could ensure steady work for years to come in a field she says is fickle and getting more crowded all the time. Between the several new titles that Patterson produces each year (some co-written mostly by others, with his endorsement) and the repackaging of already-published work, Hachette creative director Anne Twomey estimates they put out at least one title a month under his name.

To publishers, the most important aspect of a cover image is how well it helps sell the book.

“It needs to be direct and iconic, bold and bright for the mass market,” said Twomey. “To get your work used a lot, you’ve got to have that kind of imagery down.”

Ansley typically shoots subjects from the back, or in silhouette, or both, because readers may prefer an indistinct image onto which they can project their own fantasies.

“We don’t want to spell out exactly what a character looks like, because readers like to picture it themselves,” said Twomey.

Ansley has learned that diverse but generic imagery, uncluttered backgrounds and using a lot of reds and blues, help keep her work in demand. But when she’s got three models right there at home living under the same roof, she can’t resist showing them off, too.

Besides, she said, “it’s like with advertising. Women just sell better than men.”